Millennials are now the largest generation in the U.S. labor force, and the oldest members of Gen Z (post-millennials) have just reached working age. This influx of younger generations into the workforce has sparked new employment trends, especially when it comes to worker mobility. This article is about the 10 best-paying cities for young workers. 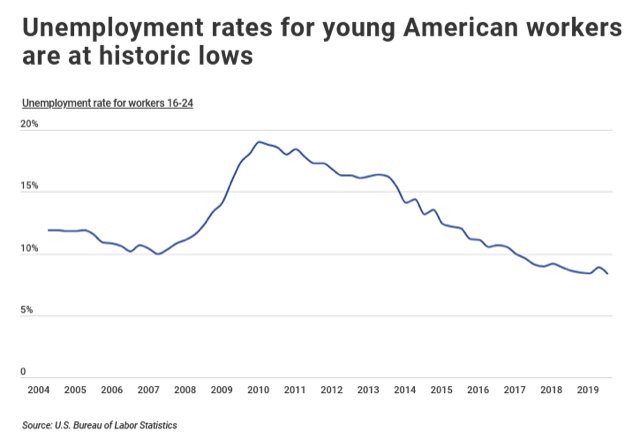 Even though young adults are major drivers of the labor force, their earnings tend to be low. According to data from the U.S. Census Bureau, people under age 25 earn significantly less than older, more experienced workers.

Nationwide, workers under age 25 earn a median salary of $25,700, roughly half of what workers ages 35-44, 45-54, and over 55 make. However, median salaries vary considerably across locations. Especially when accounting for the cost of living differences, some cities offer far more in compensation to those just starting out in their careers. 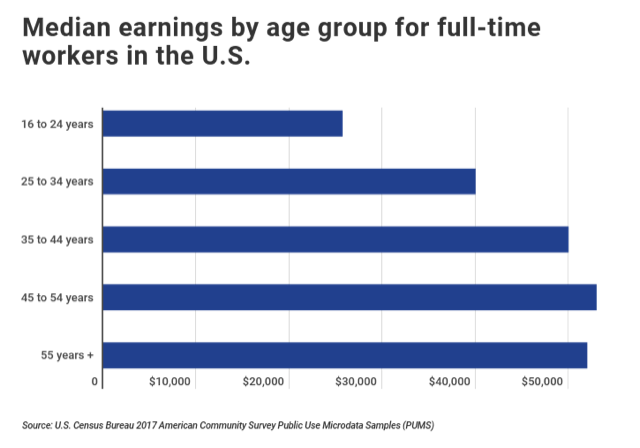 Although big cities have historically attracted droves of recent graduates, the high costs of living in places like New York City, Washington D.C, and San Francisco make it hard for young people to afford rent while also paying off student loans and enjoying the city life. Fortunately, there are alternatives with robust job markets, competitive wages, and lower living costs.

To find the best-paying metro areas for young people, researchers at AutoInsurance.org  analyzed the latest earnings data from the U.S. Census Bureau. Median earnings for each metro were adjusted up or down based on the relative cost of living in that metro in order to get a comparable metric of purchasing power across locations.

Only metro areas with over 100,000 people were included in the analysis. Additionally, metro areas were grouped into the following cohorts based on population size:

Overall, cities in the Midwest tend to pay young workers the highest wages when taking the cost of living into account. Here are the U.S. metro areas with the highest adjusted median earnings for full-time workers under the age of 25.

While Milwaukee residents must brave the long, cold winters, they also embrace their summers, celebrating nearly every summer weekend with festivals and cultural events. Young Milwaukeeans can also take advantage of sailing, windsurfing, and kite surfing on Lake Michigan.

The Indianapolis metro area’s economy has shifted away from its manufacturing backbone as new sectors have established themselves. More specifically, Indy’s large population of young people can find well-paying jobs in the area of biotechnology, life sciences branch, and healthcare sectors.

Young Indy residents will also appreciate the Indianapolis Cultural Trail, an eight-mile pedestrian/bike path that connects downtown to other areas and provides easy access to restaurants, shops, and public art. An added bonus is that the dollar goes far in Indianapolis since the cost of living is 8 percent below the national average.

Pittsburgh boasts a cost of living that is 6 percent below the national average. Once known for coal and steel, the area’s economy is now driven by the technology, health care, finance, and education sectors. Young adults may first come to the area to attend one of several prominent universities (including the University of Pittsburgh and Carnegie Mellon), but well-paying jobs should entice many to stay and call Pittsburgh their permanent home. Outside of the office, Pittsburgh residents can explore the city’s many bridges, river sports, and museums.

TRENDING
Regardless of your personal situation, we can help you find the right auto insurance for you. Interested in an auto insurance quote without personal information? We’ve got you covered. Looking for a low-cost full coverage auto insurance? We can help with that too.

Over one-third of Cincinnati’s population is under age 25. This large proportion of young people enjoy high median earnings and the cost of living well below the national average. Major industries in the region include healthcare, aviation, and education. There is no shortage of things to do, either. Cincinnati has a number of breweries, including Rhinegeist Brewery, MadTree Brewing, and Braxton Brewing Company. Residents of all ages can also enjoy free outdoor concerts and shows at Riverbend Music Center or the historic Music Hall.

The Omaha metro area claims the number one spot on the list of best-paying cities for young people, with an adjusted median income of $32,432 per year. A large number of young people call Omaha home—over 35 percent of the area’s population is under the age of 25.

Now, the moment you’ve probably been waiting for if your metro area hasn’t been featured in any of the lists above. We have four tables in this section:

Let’s start with the large metros, as this was the sample set we used for our main ranking.

Now that we’ve gone through the 10 best cities for young workers, let’s answer some of your frequently asked questions. They include:

Let’s jump right into questions about the best cities for a career as a young professional.

#1 – Where should young adults move to?

For young adults, there is one feature of a city or location that separates them as an age group compared to other age groups: the number of available entry-level jobs. People of all ages want culture, recreation, and things to do, but young adults who are looking for that entry into the workforce would want to look at places where companies are hiring for entry-level jobs.

This includes cities like Austin and Seattle or other, smaller cities depending on the young adult in question. This, of course, may change in the future as more companies are allowing remote working opportunities.

#2 – Where do most young adults live?

The stereotype is that most young adults (Millennials and now Gen Z) live in cities with vibrant culture and a more liberal atmosphere. Austin, Seattle, Portland, and San Francisco are just four of those cities. But other popular cities include Charleston in South Carolina, Nashville in Tennessee, Denver in Colorado, and Jacksonville in Florida.

#3 – What city has the highest paying jobs?

What are the best cities to move to for work? The city with the highest average salary in the world, perhaps unsurprisingly, is San Francisco, which is the home of many tech companies. While a monthly paycheck of $6,000 or more may sound appealing, a $12 cup of coffee or a $2 million starter home for a family might not sound as good.

Like with all these questions, it depends on the person on what the best cities to relocate to are. If money is an issue, checking out Cleveland, Memphis, or other cities that have a low cost of living might be good. For an artsy culture, LA, New York, and Miami have large and active artist communities. For a slower pace of life, many Midwestern states or rural states, in general, may allow you to reconnect with yourself and nature.

#5 – Where is the easiest place to live?

The easiest places to live are often those with a low cost of living such as a Memphis or Cleveland but still have a number of attractions or a vibrant culture built around food, music, or some other type of cultural activity.

If you’re an American looking for a new place to start over, knowing what you’re looking for in that new place is important. Maybe you’ve always wanted to move to a certain city but haven’t been able to because of finances, relationships, or job restrictions. Now is your chance.

Different regions in the country and even different cities in the same region have different cultures, so learning more about them beforehand can keep you from making the mistake of just picking up and going, only to find yourself miserable in your new place.

Of course, there’s nothing saying you have to live in the U.S. either.

#7 – Who earns the highest salary in the world?

The occupations with the highest salaries in the world tend to be health-related occupations like anesthesiologists, surgeons, physicians, and more.

New York City is the richest city in the world with over 120,000 residents having net worths of over $5 million and an annual budget of over $80 billion.

Metro areas are ranked by the cost-of-living adjusted median earnings for full-time workers under the age of 25.

Only metropolitan areas with at least 100,000 people were included in the analysis. Additionally, metro areas were grouped into the following cohorts based on population size:

Only large metros are included in the above countdown. Now that you know the best cities for young workers, are you ready to compare rates? No matter what age you are, if you own a car and plan to drive it, you need auto insurance.

Whether you live in one of the best cities for young workers or not, inserting your ZIP code into our online quote generator will help you find the best rates for you, dependent on your demographic information, driving record, and area.